Remember when we tried the 3-day method?  Then, we gave up after two days, since it was obvious that Shlomo understood what he was supposed to do, but didn’t seem interested in doing it.  We gave up after a discussion with Yitzchak’s mother, who didn’t hold too much hope, since she’d trained two like this herself (one, of course, was Yitzchak). 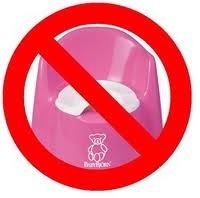 The ganenet (preschool teacher) trains the kids in twos, the older ones and more ready ones first.  Shlomo is one of the oldest kids in the gan, and I knew that she was planning to start right after the holidays.  In other words, when she told us last Wednesday that we should bring Shlomo in underwear, I was already expecting it.  She told us to put him on the potty every ten minutes, and not to ask if he had to go, since he’ll just say no, just put him on the potty every ten minutes and make a big deal of it when he goes.  I saw no reason not to go with her method, since ours hadn’t worked, and figured that maybe this time, because it’s both at gan (which he loves, and has a potty-training partner) and at home, maybe it would work.

Thursday morning I brought him in a diaper and she changed him into underwear at the gan, in front of all the kids, while praising him.  He let her put underwear on him, but as I walked out I saw his face.  It said, “Uh-oh.  I don’t think I like this idea.”  Mind you, on Wednesday afternoon, when I came to pick Shlomo up and got the details of the plan from the ganenet, I had said, “You want to go on the potty like a big boy?  And wear underwear?  You’re going to be so big!”  And Shlomo said, “Uh (his version of uh-uh).”  I tried again, “Right there are other kids who also go on the potty?  And you’re going to make pee-pee in the toilet just like Abba?  What a big boy you’ll be!”  And he said, “Uh.”  The ganenet and I just looked at each other and she said, “He’s already big, just bring him in underwear and he’ll learn.”  I told her that he knew, but refused, and she just said we’ll train him and he’ll be fine.

Well, I’m not going to argue with an experienced ganenet who’s been doing this for thirty years, and has grandkids herself, right?  After all, even if I helped potty-train my siblings, I’m still a young parent who’s trying to train her first kid.  And hey, if this works it’ll be worth it, right?

Thursday: One in the potty and one in his pants.  He woke up from the afternoon nap dry, and the ganenet is in shock that he can hold his pee that long.  At home he went once in his pants and twice (big pees, too) in the potty.

Friday: In the morning before we left he made a big pee in the potty.  These big pee-pees give me hope, because last time we did this, we only got little drops.  Now, it actually looks like he peed everything into the potty; maybe he’s willing to work with us, after all.  At gan he doesn’t go at all – not in his pants and not in the potty.  I pick him up at 12:00, because it’s Friday.  The ganenet says, “He just holds it in, he doesn’t want to go.  He definitely has his own opinions.”  Yep, he does.  We sit him on the toilet, and he goes again.  He wakes up dry after his nap (which was pretty long).  Then three pee-pees in his pants, one of them with poop, too (obviously, right after Yitzchak left for shul (synagogue).

Shabbat: Twice he made teeny drops of pee in the potty, probably just to get us off his back.  Three poops and two pees in his underwear.

Sunday: Two pee-pees in his pants at gan.  At home, once a little pee in the potty that continued even after he got dressed again, and one pee-pee just in his pants.  He ran away from the door to gan in the morning and ran away from the door to the house in the afternoon.  Both, presumably, because he knew he’d be put on the potty when he came in.  Big temper tantrum when we tried to put him on the potty.  Eventually he calmed down when we gave him his awful butterfly.  When I drop Shlomo off in the morning I speak to the ganenet.  I tell her what happened on Friday and Shabbat, and she just says, “Oy yoy yoy,” and sighs.  Then she says it’s easier to train them at age two, and now it’s a little later so it’s harder.  I remind her that we’ve tried to train him already and tell her that we did that at two years and a month or so.  She asks if I want to give up.  I say no, he’s big enough, he needs to be trained.  On the way back from dropping Shlomo off at gan, I remember that my youngest brother also refused to train, until he was almost three and my mother forced him.  Great.  He gets it from both sides.  Is this like teething, where late gene + late gene = super-late gene?  I hope not.

Monday: One pee-pee on the floor when we were getting dressed, right after he insisted on getting off the potty.  To his credit, there is also some pee in the potty.  (I tell Yitzchak that we’re saving the pee till the afternoon because I forgot to make a fuss about it and let him flush the toilet.  Ew, but whatever.)  One more little drop while we were heading out the door (didn’t change him, though).  Three pee-pees in his pants at gan.  One pee-pee in his pants at home.  Again, temper tantrum when we tried to put him on the toilet.  This time, lasting longer and only stopping right before I got home.  Eventually he agreed to sit on the potty and play with his awful butterfly (which is his official potty-training toy).

Tuesday: No pee in the potty this morning,  but none on the floor, either.  The whole walk to gan I tell him, like I did on Sunday and less so yesterday, that he needs to go in the toilet for the ganenet and not in his pants.  That what the ganenet says, goes (just like you can’t ignore her and pretend you don’t know Hebrew).  Yitzchak picks Shlomo up at a quarter to four and calls me: The ganenet said to just give him back his diaper, he’s not interested.  I wonder what she thinks about all this . . .

6 thoughts on “Potty Training, Round 2: Failed”