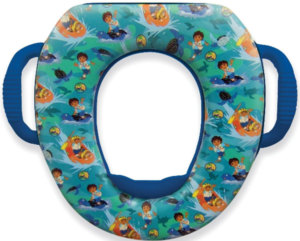 A couple months ago, we got a little toilet seat.  You know, one of the padded ones that you put on top of the big toilet.  Well, for the past two or three weeks, every time I go to the bathroom when Shlomo is awake, and yes, that means every time, he follows me in, takes his toilet seat, and asks to sit on the toilet.  Somehow, the idea that the toilet is occupied has not yet registered.  Yesterday, he tried to move me a bit, to expose a bit of the toilet, so he could put the seat on.  Um, a little bit of the toilet isn’t enough, kiddo, you need the whole thing.  And, only one person can sit on this throne at once.  I got here first.  Plus, asking every time that I go to the bathroom really doesn’t make me too motivated to put you on the toilet and give you the truck book.  It just wears on my nerves.  Ask when you have to go, not when I have to go, and maybe I’ll feel differently.

To his credit, he does ask when he has to go, sometimes.  And sometimes he asks just after he went in his diaper.  Oh, well.  I guess it’s part of the package.

The best part, though, is that we went away for Shabbat, and left the toilet seat at home.  From Friday afternoon, until last night at around ten-thirty, I got to go to the bathroom all by myself.  That is, except for once on Friday night, when Yitzchak couldn’t watch Shlomo, and everything was kind of chaotic, so I had to take Shlomo with me to the bathroom.  It wasn’t too bad, though, since we didn’t have his toilet seat.  However, I was kind of bummed that just after I had been looking forward to 36 hours of going to the bathroom alone, I had to take Shlomo with me.  For the rest of the time, though, I enjoyed the solitude.  Man, was it nice to go by myself.

Anyone share the sentiment?  Or have I just randomly rambled about a topic that is disgusting, [supposedly] private, and completely non-interesting?