No, the risks are too great.  Yes, I have to get up.  Yitzchak will get Shlomo, find his shoes, and head to the door.  I will find where my hat fell (to cover my hair), find my slippers, and go.  This whole conversation in my head lasts about five seconds.

I bolt upright, planning to find my slippers and hat.

It was just a dream.

“Nothing, I thought there was an azaka (air-raid siren).”  I lay back down; my heart is still beating fast.  In my stomach, I feel the effects of the adrenalin rush.  It’s a good thing.  I take a deep breath, remind myself that it was just a dream, and try to relax.

I guess this is how Shlomo feels when he dreams of woo-woos.

Just so that you can hear what I heard (or what I thought I heard).  Ours are slightly louder – or maybe not, it could just be less traffic.  Notice that the cars are stopping.  When there is an azaka, people who are driving are instructed to stop their vehicles, get out, and lay prone on the ground, to minimize the chance of injury.  Because not everyone follows these instructions (and just in general), it is safer to go to the side of the road, which is why everyone is going over to the shoulder.

Israel is at war.

Yitzchak is relieved – between Syria, Hamas, and Iran, he’s been tracking the news and worried about who, what, when, where, and how we will have to fight.  So now that we are busy with one of them, he’s relieved – one issue out of the way, and less worries that all three will explode at once.  I understand him.  Really, I do.

It doesn’t make me less nervous.

I hate, and all of Israel hates, dead bodies.  Israel, a country born in the wake of the Holocaust, especially hates dead Jewish bodies.  Especially when the dead Jews are young and innocent.  We will do all we can to avoid having to face dead young Jews.  We will do all we can to prevent young Jews from dying.  And that is why, we left early in Cast Lead, why we did not send in tanks in Defensive Shield, and why we waited so long to do so now, in Protective Edge.  It is also part of the reason why we cannot cite the Second Lebanon War as a success.

This is the reason we went into Gaza now.  Because we understood that our repulsion is going to have to be ignored.  Either the dead young Jews will be civilians, traumatizing families and communities, at unexpected times and in unexpected ways – like the three boys who were kidnapped and murdered, Hy”d – or the dead young Jews will be soldiers, fighting in battle, accomplishing something with their deaths, and fighting in an organized fashion for the rest of the country, for their younger siblings, for their cousins, for their communities, for their children.

And Israel prefers – everyone prefers – to die on the battlefield accomplishing something, than to risk dying for nothing, with the killers running loose, after being captured by terrorists.

So we sent soldiers in.

Like Bennett said, if we had not done this now, there would be an Israeli 9/11.  We prefer to fight and defeat.  We do not want an Israeli 9/11.  The American one could’ve been avoided.  It was an avoidable tragedy, and those are the worst kind.

I am actually glad that we are getting so many sirens and that they have discovered so many tunnels.  I am glad that they break humanitarian ceasefires and that they have outrageous demands.  It means there is no chance of a ceasefire.  Which means that finally, finally, we have a chance at security.  The flip side of our sirens is that most of them don’t make the news.  And even when they do, we don’t know how many were shot or where they landed – for the simple reason that we don’t want to aid Hamas in bettering their aim.  But the more sirens our particular city gets, the higher the chance of us seeing this through to the end.  So let them throw sirens, as long as we are all at home.  We will find mattresses and sleep in the shelter if need be.  As long as it’s not in vain, and we accomplish everything we went into Gaza for.

We are getting more and more used to the sirens.  At the very beginning, it seemed that everyone but us and a few other cities/areas had not had sirens.  (Not counting, of course, the very north of the country, which has had sporadic spillover from Syria for a while, but that Hamas can’t yet reach.)  We knew our turn would come, it was just a question of when.  We knew our ‘neighbor” (a city quite a bit away from us and everyone else) turn would come, too, and wondered about when.  Both us and our neighbors’ turn came at the same time.  Within a few seconds we were in shock, freaked out, and then calmed down and went to the shelter.  I spent three and a half hours in flight-or-fight mode.  The next morning, we had another siren.  I freaked, Yitzchak freaked, we went downstairs to the shelter and were done.

Now we don’t freak.  We just get up and go, racing against the clock.  It’s kind of good that we’re not freaking out anymore.  It’s also sad.

We don’t have one every day.  But a day that has two sirens – and we’ve had two of those days so far, three if you count the first siren we had, when a minute after the first siren there was a second siren (I don’t usually count it though, because we were already in the shelter) – makes up for a day without a siren, when you’re just worrying, wondering, and waiting.  And when you do the math, it comes out to a ratio of about a siren a day, maybe with one extra day in there with no siren to match.

P.S. – I am writing up a bunch of posts about Protective Edge and setting them to publish during the coming week.

P.P.S. – Anybody who would like to help families closer to Gaza – those who have between fifteen seconds and a minute, and suffer rocket attacks several times a day, can take a look at Janglo‘s list of things to do to help.  There are also options for helping soldiers and helping the families of the reservists who were called up. 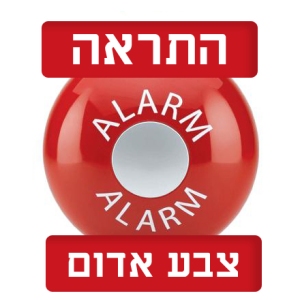 The Hebrew on top says, “Warning!” On the bottom, it says, “Color Red,” (the highest level of alert).

Back in January, I joined a Hebrew-language forum on a site that caters to religious Jews.  As with all communities, it takes a while to get used to the unwritten rules.  I had a few ups and downs, but have pretty much become part of the online community and settled in.

Last night someone started a thread on what to do when there is an air-raid siren.  She asked for tips from people living in areas that get a lot of sirens and rockets.  She has two kids: a two year old who sleeps in the next room, and a baby who sleeps in the parents’ room.  Their “protected space” is an alcove by their front door.  She has 60 seconds to get them both in.  And her question was how should she do it, if her husband happens to not be home at that moment.  If he is home, it’s simple – they each take one kid.  But if he’s not, how will she manage to get both kids into the protected space within 60 seconds?

It’s a really sad question, and a tough one, too.  It’s something that I think about a lot.  Right after Shlomo was born, Yitzchak and I made an earthquake plan and a rocket plan and a chemical-weapon plan.  And we started putting together an emergency kit, equipped to deal with all three situations (it’s not finished yet – most of what is missing is food and appropriate clothing for chemical attacks).

Her question got a lot of answers.  Some people said that they just gave up – they can’t get all their kids into the protected space within fifteen seconds, and they can’t choose, either.  Some people said that 60 seconds is a lot of time.  I guess that depends.  But if your protected space is nearby, and you have  a minute and a half until the rocket falls, that time can feel like forever (I know).  One person said that technically they have fifteen seconds, but she often hears the rocket fall within that time.

Just remind me – who is occupying who over here?

Yeah, that’s what I thought.

Me, I’m not willing to give up my minute and a half.  I want to move somewhere where we’ll have at least that amount of time, and if we have two minutes, all the better.  I know that in the middle of the night it’s not fun.  But at least in the daytime, when you’re not necessarily beside a safe room, you have time to run.

And I won’t rent an apartment without a safe room.  And the safe room will be the kids’ room.

One person wrote that during Operation Cast Lead, she was in charge of a branch of one of the youth groups, and her branch invited a branch from the line of fire to join them.  The two branches started playing tag.  Guess who ran faster . . .

Then, of course, there’s always the emotional effects of the sirens.

I think the best thing that could happen is that Hamas, Hezbollah, and the other terrorist organizations will get mad at each other and do the dirty work for us.  Then, at least, we will have quiet.

In the meantime, Netanyahu doesn’t seem to care about what’s happening, as long as it doesn’t affect him personally.  Neither does the rest of the world, of course, but that’s not surprising; it’s pretty much expected.

Note: Not every apartment has a safe room.  Sometimes the “protected space” is just the space the has the fewest outdoor walls and is not the kitchen or the bathroom.  Some apartment buildings have a first-floor bomb shelter that all the tenants use, even the ones on the fourth floor or higher.  And some apartment buildings don’t have anything, and you have to choose, in a split second, whether to make a run for the neighborhood bomb shelter (which may be too far away or too old to be really safe) or the stairwell (which may be better than staying where you are but not necessarily is it 100% safe).