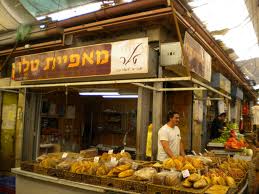 A bakery in the shuk – not the one doing the renovations.

The convenience store seven minutes’ walking distance away did renovations recently.  They did not close; they simply worked while the customers were there.  When they had to redo the floor, they did it piece by piece.  They had their blowtorches going while they worked, with sparks falling all over the area.  Granted, they did a more superficial renovation than some do.  But, they never closed their store to do it.

One of the bakeries in the shuk is doing renovations.  They have been working on these renovations little by little, but now they have to do the tough stuff.  This is not a superficial renovation.  This is a complete renovation.  They have closed the parve (non-meat, non-milk) section of their store for the past two or three weeks, and it will remain closed for another two or three weeks.  In the meantime, their dairy store, adjacent to the parve store, is still open.  It is so crowded there that if you are behind the counter, you can’t move.  To find anything, you have to dig.

To cut their losses, the bakery is renting a store that used to be a hardware store, then a variety store, and is now closed.  They are baking from there, and shipping all their goods to the shuk, right across the street.  The reason they went to all this trouble?  The owner did not want to take a loan.  And it is common knowledge in Israel that if you close for renovations, you might have to sell soon afterwards.

People patronize stores.  If the store isn’t open, they go elsewhere, and may not come back.  This bakery has several stores in the shuk, so they have less of a worry than some others.  But, they still have to keep up their sales.  After the basic renovations are finished, the store will reopen, and they will be renovating while the store is open for another six or seven months.  In the meantime, another bakery in the shuk is selling some of their wares, for a cheaper price than usual.  It seems that they have distributed their wares to several different stores in the shuk.  Don’t ask me how, or how many.  I have no idea.

There is a meat store just around the corner from this bakery, also in the shuk.  They are closed for renovations, but are renting out the space just in front of the store, which is on a slight platform, to someone selling vegetables.

This is the way business in Israel works.  Any good American would take out a loan, close the store, renovate, and reopen with a grand sale.  The Israelis don’t want to incur such losses.  And so, renovations while the store is open are nothing even to blink about.  This is Israel.