So, no one cares if innocent Israelis get hurt or killed by inhuman terrorists.  But if Syrians gas their own children – this we have to stop.  For this, we can start World War Three.  At Israel’s expense, of course.  Our families won’t be wearing gas masks and sitting in bomb shelters, eating food out of cans and rationing water.  We’re too far away.  But Israel, Israel can handle it.  They didn’t ask for this war and they’re not part of it, but so what?  They can take the burden, they can take the fear and the fighting.  Their families are better sacrifices than our own.

Seriously, world?  Take your nose out of our business and mind your own.  Syria will do what Syria will do.  Until you live in the Middle East, you don’t understand how the Middle East works.  Let them fight their own wars; it means that they’re too busy to fight others.

Before you jump into a war that will put someone else in danger, think about whether or not you’d put yourself and your own family in that same situation.  We didn’t ask for this.  We don’t want it.  And we’d really rather stay out of it.  But, of course, because Syria is our northern neighbor, we will have to deal with the consequences, to a greater or lesser degree.  (Of course, we’re all hoping and praying for the lesser degree.)

I knew something was up when Yitzchak called the Home Front Command tonight.  Shlomo’s gas mask box was accidentally smashed under a pile of books.  A plastic strap is sticking out.  We don’t know if the mask is damaged, because we’re not allowed to open the box until we are told to.  So, Yitzchak called the Home Front Command.  At first they said that damages would cost us 500 shekels.  (OMG, really?  Like we have the money for that now.)  Then I heard Yitzchak talking about going to Jerusalem to have it checked.*  And I started thinking – huh?  They don’t have a distribution point in Jerusalem.  Then he spoke about Be’er Sheva.  DO they have a distribution point there?  Why does he still want to go to Jerusalem?  And why would he go to Jerusalem if there’s no distribution point there, anyways?

Well, it turns out there is.  And there will be one opening in Be’er Sheva on Sunday.  Something smells really funny here.

Yitzchak looked upset, so I asked why.  I figured he’d say that it’s late and he’s tired.  Instead, he says that America decided to go to war, with all of Europe, against Syria, and that Syria threatened to attack us, Israel, with chemical weapons, if America actually went through with it.  Yay, America.  Yay, Obama.  Save the world on someone else’s backs, not ours.  You world-class [closet] anti-Semites and idiots.

I guess that explains why Mom (Yitzchak’s mother) called at such a random time.  It explains why they are opening new distribution points, why everyone on the Hebrew-language forum I’m on is freaking out (I freaked out a long time ago), and why Yitzchak is so upset.

It also means that we need to finish stocking our kit.  Dang it.  This is NOT the expense we needed right now.  This is NOT what we want to be doing right now.  At least we are in the South, far away from Syria and pretty much everyone.  The army has started calling up reservists.  Yitzchak wanted to join the army back in June, and he would have done basic training, making him an option if the army was pressed for manpower.  But the basic training would have fallen on what I thought would be the toughest three weeks of the year, and I refused (Yitzchak doesn’t have to serve).  When those three weeks weren’t so hard, I felt like we’d lost out on an opportunity.  Now I know why.  Thank G-d.  But – Jack is in the North, and he’s going into a combat unit.  Oh, dang it.

World, I hate you.  Mind your own business and fight the real bad guys, not the people who are minding their own business in their own country, with their own families.  You can’t save the world.  You’ll only make things worse.

*(End of story: The person asked why we don’t know if the mask is damaged.  Yitzchak told her that we haven’t opened it to check, because we’re not allowed to open it.  Oh, oops, you’re right – you’re not allowed.  So take it in to be checked, chances are that since it was an accident and you still haven’t opened it, you won’t have to pay a fine.  Yitzchak doesn’t want to wait until Sunday, he’ll go in to Jerusalem tomorrow to get it checked.)

I wanted to link to a video on how to put a gas mask on your kid.  But the videos on the Home Front Command’s website (pikud ha’oref) aren’t working for some reason.

So, take a PDF of the instruction manual instead.

Here is a link to the Home Front Command’s explanation of the different types of gas masks. 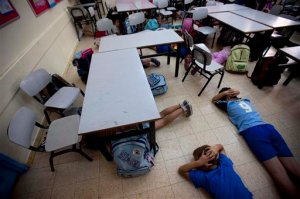 A police siren?  A firetruck?  An ambulance?  No, it’s lasting too long.

I thought we were past this.

I find my phone and my shoes.  I put on my shoes.  Shlomo takes one of his shoes and hands it to me.  He thinks we’re going.  We are.  He doesn’t know where.

I don’t have a key; Jack took it by mistake when he left.  I will have to get a copy later today.

I go down the the shelter, calling Yitzchak while I go.  The call doesn’t go through.

I walk down to the shelter.  Don’t worry, I tell myself.   It’ll fall in Gush Etzion.  The Arabs have horrible aim.

The shelter is open.  I walk in, and look in disbelief at the other three people there.  Why are there so few people?  And what under the sun . . .?

It’s a drill, they tell me.

Of course it’s a drill.  I read about this two days ago.  I knew that they would be doing a drill today, Thursday, between ten and twelve.  And, they always do drills on Thursdays (not true, but I wasn’t remembering correctly at the time), though, admittedly, around eleven o’clock instead of “between ten and twelve”.

How could I have forgotten?  I told the other people.  Of course, it was on the news, and I just plumb forgot.

We can go now, they say.  No, says one of them.  We need to stay fifteen minutes.

No, I say.  Only ten minutes – that’s what the Home Front Command says.

I sit down and put Shlomo’s shoes on his feet.

The feeling of stupidity has not yet surfaced.  I am too tense.  It was too real.  Too scary.  And didn’t they do all the previous drills with just a flat note, instead of up and down?  Why was this one different?

I know why it was different.  They wanted it to be a real simulation, so that it would be taken more seriously.  Or maybe this is how they always did the drills, and I just never paid attention, because I knew they were drills.

We leave the shelter, and walk back to our respective places.

I am still shaken.  It was too real.

Too late, I guess.

I hope it’s the last time that I’ll have to hear that siren.