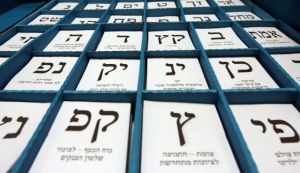 On Tuesday, we had elections.  There are a few things you should know about Israeli elections:

1) School is off, because the polling booths are in schools.  Not every school becomes a polling booth, of course, but we have to be fair.

2) You bring your identity card.  They tell you which room to go to, and you show the people in that room your card.  They check your name off the list and give you an envelope.  You go behind the screen, pick a paper to put in your envelope, close the envelope, and put it into the box.  It is a one-at-a-time procedure.

3) We have a coalition, which means not every vote becomes meaningful.  If a party does not have enough votes to get two mandates, then those who voted for that party basically wasted their votes.  The head of the biggest party (numbers are determined in the primaries) becomes prime minister – usually.  If he or she can’t form a coalition, as with Tzipi Livni in the last elections, the head of the second-biggest party gets a chance.  We also don’t know the results of the polls right away; we only know how many mandates each one received.  The real results only come out after the coalition is formed, which can take up to three weeks to happen.

5) Each party chooses a letter (or two or three letters) of the Hebrew alphabet.  These letters are what is printed on the slips of paper that you put into your envelope.  Some of them are kiind of creative: One party’s letters spell “sunrise”; one party’s spell “good”.  Some of the letters are more random, though, such as the first, second and/or third letter from that party’s name.